“Tenuta di Trinoro is remarkably direct and appetizing. It is not like red Bordeaux but is much more complex than most Italian Bordeaux blends.” Jancis Robinson 2002 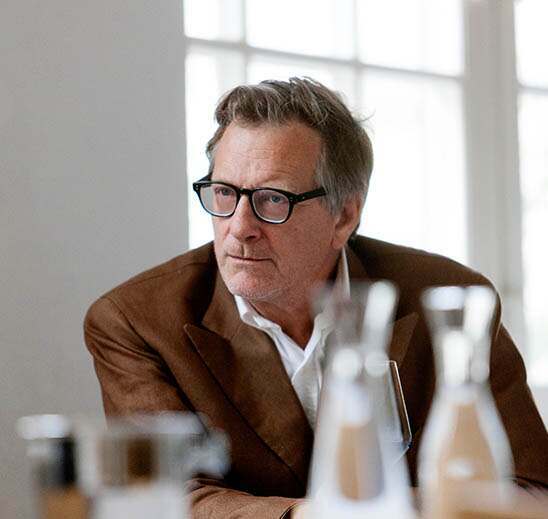 Barone Andrea Franchetti’s background, rich, varied and artistic, contributed to his extraordinarily complex character – a combination of genius, brilliance and determination. The Franchetti family moved in exalted and enlightened circles over centuries. They have touched base, through marriage and friendships with the Rothschilds, artist Cy Twombley and Ernest Hemmingway.

Before returning to Italy, Andrea Franchetti went to Bordeaux to learn the art of winemaking from his dear friends, Jean-Luc Thunevin of Château Valandraud and Peter Sisseck of Dominio de Pingus.
In 1992, he landed in rural Tuscany, the isolated Val d’orcia, where Tuscany intersects with Umbria and Lazio, a remote region that hadn't seen vines in years. Andrea carved out his own access over a tree-covered hillside, starting a vineyard from scratch, building terraces in a unique inland valley at between 450 and 600 meters above sea level.

He sold one of his Uncle Cy’s paintings to buy Tenuta di Trinoro, which he refers to as “a godforsaken place….with an ex-volcano between it and the sea”. He has also said of his first visit “I went crazy for the place, I was mesmerised’.

Here, the soil was eroded rock in parts and in others limestone and clay – reminiscent, in Andrea’s eyes, of his beloved Bordeaux. This was one reason why he looked towards Bordeaux varietals rather than Tuscany’s ubiquitous Sangiovese. And it was proved he is right.

Now, Tenuta di Trinoro is the flag-bearer of the Trinoro estate, a rare & high quality wines, the blend of which is vintage-dependent. Cabernet Franc and Merlot tend to dominate, with varying amounts of Cabernet Sauvignon and Petit Verdot. Palazzi, 100% Merlot, the first commercial vintage in 1997 together with Tenuta di Trinoro. It was a hit amongst critics, but then Franchetti decided to stop making it for ten years. 2009 was such a beautiful vintage, however, that he was inspired to begin producing this wine again due to how wonderful the Merlot had developed that season.

THE WINES OF TENUTA DI TRINORO 2020

2020 Spring in Val d’Orcia was perfect to produce high quality grapes, just a few days of rain during the growing season, but very welcomed by the vines.

Budding before and flowering later were great thanks to the absence of the usual winds during the spring.

May, June and July were mild and perfect to allow the grapes to create generous bunches.

August was very hot and dry, the hardest time for the vines, but at the end of the month much needed rain came through which enabled us to avoid excessive stress to the vines.

The blend is 92% Cabernet Franc and 8% Merlot. The flagship wine from the estate coming from 20-25 years old vines. The wine echoes top class right bank Bordeaux. Aromatic blackberries, blackcurrant, plum on the nose with beautiful floral like violets and roses. On the palate there’s coffee, chocolate, liquorice, and spice with ripe fruits, high acidity, fine tannins and a long full-bodied complex finish.

100% Cabernet Franc. Magnacosta is a 1.5 hectare gravelly site where an old stream eats (magna) into a hillside (costa), making for deep alluvial soils, parcel of river gravel and silt on the valley’s bottom. The Cabernet Franc, grown from Pomerol cuttings is, in Andrea’s mind, the ‘lightest of the campi'. It certainly tends to be the most accessible. Magnacosta has the most intense aroma among three single-vineyards of Cabernet Franc. On the nose, flowers, red berries, dried blackberries and plum with hints of herb and mineral, smoke and tar. Approachable now but also shows to be a powerful and complex single-vineyard Cabernet Franc that will develop further over time.

100% Cabernet Franc. Grown on a tiny west-facing plot of 0.3 hectares, lying at 520m altitude. The soil is 2.5 meter-deep, crumbly limestone and thick sand. The 2020 Campo di Tenaglia opens up with a beautiful nose of ripen fruits, smoke, spice and roast meat along with high acidity with firm but elegant tannins. Currently a little shy with the potential to fully show its density, complexity and concentration with time.

100% Cabernet Franc. Campo di Camagi comes from a 1.5 hectares plot at an altitude of 600-700m. The plot planted in 1991-92 and is the oldest of the campi. Very low yields at no more than six clusters per vine. The nose is perfumed and violet-driven, along with blackberry, black currants, prunes and fruit jam. It finishes with smoky ash, tobacco, spices. A very firm, well balance, intensity and complexity wine.
Andrea describes Campo di Camagi as the “most dramatic” of the campi.