STRENGTHENED BY EXPERIENCE, THE SKILLS ARE MASTERED 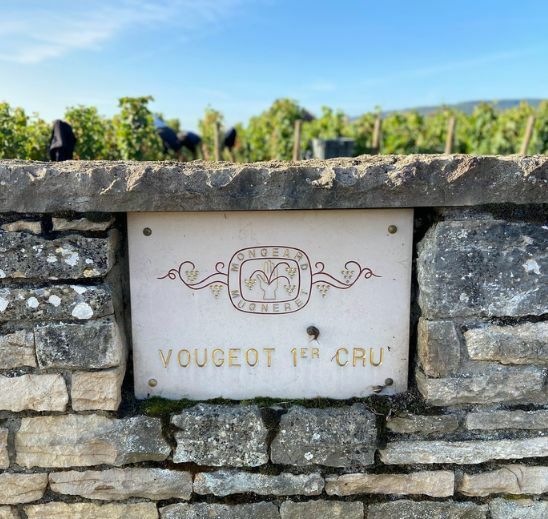 Vincent Mongeard runs the family estate in Vosne- Romanée since 1995. He farms 30ha of vineyards with holdings spanning across the Côte d’Or. The historical plots are in Vosne-Romanée and nearby, where he makes some Vosne villages and 1er cru, a Clos de Vougeot, some Échézeaux, Grand-Échézeaux and a Richebourg.

The domaine Mongeard-Mugneret has been based in Vosne-Romanée since the 17th century. It covers an impressive 30 hectares of vine and 35 appellations, mostly in the Côte de Nuits, producing reds and whites of classic complexity and long-ageing potential.

Vincent is the eighth generation leading the domaine. He joined his father Jean in 1976, and fully in charge from 1995. The nineth generation is already in place with his daughter Justine in charge of the cellar. The family has an impressive line-up of holdings throughout the Côte d’Or, the pinnacle of which are the reds from Vosne-Romanée.

1945 was the first vintage bottled under the Mongeard-Mugneret name and exported to the US market. Today the domain’s wines are distributed globally and its name is firmly on the rise.

The style of Mongeard-Mugneret wines is terroir-driven. They express the identity of the appellations and don’t follow new trends. Just as Jean had displayed a forward-thinking approach in domain-bottling his wines, he was also one of the first growers to green harvest (cut off excess bunches of grapes). Vincent continues some of these practices but prefers hard pruning in winter. Of course, each vintage being different, Vincent adjusts his decisions to what the year brings.

Since the mid-1990s, vines are tended in accordance with lutte raisonnée principles.
This involves using organic material wherever possible and chemical treatment only as a last resort, in difficult years. For ten years now all the grands crus and some of the premiers crus are biodynamically farmed. Gradually, this is being extended to the whole domaine. All of the work is done by hand, with the exception of a tractor for ploughing.

Vincent allows the must a short period of cold maceration prior to fermentation. He only uses natural yeast for the fermentation. In line with Vosne tradition, he uses a robust proportion of new oak: 60% to 100% for the grands crus, 30% to 40% for the premiers crus and 25% to 30% for the village wines. He does not filter or fine prior to bottling.

The grapes are fully destemmed for the regional wines while from the village plots and up, Vincent keeps an increasing portion of whole bunches, when the ripeness level allows. The wines are made for long ageing. Old-fashioned Burgundies, in the best sense of the expression.

Since the early 2000s, Vincent has personally selected the oak for his barrels and seasoned it for two years at the domaine, before having barrels made to the specification of each vintage. He uses fine-grained oak, with a light toast (by contrast, his father favoured a heavier toast). The wines are aged in 228 litre barrels, in 600 litre demi-muids and in 1200 litre muids. 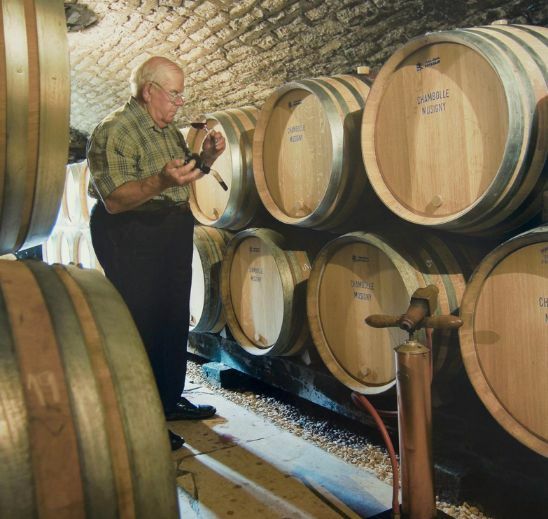 The domaine today known as Domaine Mongeard-Mugneret has been based in Vosne-Romanée since the 17th century. It covers an impressive 30 hectares and 35 appellations, mostly in the Côte de Nuits. The domaine produces reds and whites, the former in particular making some classically complex and long-lived wines.

Gevrey-Chambertin wines are deep in colour with fine expressive aromas. When young they give blackcurrants and other red or black soft fruits, with hints of liquorice enhanced by their being partially matured in new oak casks. As the wines age they acquire further aromas suggestive of animal pelts, musk, spicy vanilla and Havana cigars. Rich, fine and full-bodied they have a robust, well-balanced structure. These wines, with their resounding name, are famed for their bouquet and finesse; they are known to have been Napoleon's favourite wine, which he took with him on his campaigns. Vines are 40 years-old on average.

The Vosne-Romanée village comes from 5 plots, located on the lower part of the appellation. These parcels are in Aux Reas, Les Genevrieres, Les Vigneux, Les Violettes and Les Portes Feuilles. The vines are 45 years-old on average. The distinctive quality is the elegance. Structured by discreet tannins and an unobtrusive acid content, they are wonderfully mellow. They have substance and linger long on the palate. Very aromatic, highlight scents of cherries, strawberries and woodland undergrowth in an elegant combination of fruits and spices.

The 2019 Savigny-lès-Beaune 1er Cru Les Narbantons is another success, mingling notes of cherries and plums with hints of spices and mandarin rind. Medium to full-bodied, fleshy and round, it's gourmand and generous, with enough powdery tannin to balance out the sucrosity of the ripe vintage. Vines are 36 years-old on average.

Given how favourable to vines the land is, the wines of Maizières-Hautes alone symbolize the finesse and elegance that are typical of Vosne. With a long-lasting aroma mingling scents of raspberry and cassis, it will surprise you with its long finish and softness. This wine is both full-bodied and rich and will reveal itself to be suave and generous. Vines are 72 years-old on average.

En Orveaux is a large vineyard, adjacent to Échezeaux, although 1.79ha is designated premier cru, at the top of the slope. Mongeard-Mugneret’s plot is 1.08ha. The vines are 25 to 50 years old on average and the wine is aged in 35% new oak. Bitter cherry, with a ripe, raspberry fruited, sweetly spiced opulence. The oak is marking the wine for now, relegating the elegance of the Vosne terroir to the back of the scene. The wine should digest it, it certainly has the attributes for ageing well.

Grown a stone's throw from Clos de Vougeot, Les Amoureuses and Le Musigny, Vougeot wines are obviously strongly akin to these illustrious growths. The fact that only a small quantity is produced gives it a special cachet. Its Colour is deep and luminous with a purplish-violet tint. On the Nose, the aromas evoke violets and red & black fruits, sometimes cocoa. In the mouth, its solidly structed but its tannins have a certain delicacy and its attack is very pure. From time to time a hint of liquorice is perceptible.

Vincent farms a parcel of 38 acres, from this famed vineyard. With 30 years of age, the vines are on a soil of Bajocian limestone. Its illustrious neighbours to the north are Vosne Romanee Aux Malconsorts, to the south it is Nuit Saint Georges Aux Cras and up the slope to the west, is Les Damodes. All these vineyards are separated by a simple dirt road.

Ripe and concentrated, it will require time to integrate all its richness. The tannins were present at the time of tasting, which is always the challenge tasting young wines from barrel. Vincent is not planning to bottle the wine anytime soon, as he feels the 2020 will certainly need extended ageing in some appellations.

The domaine's 0.63-hectares of 45- to 50-year-old vines is in the lieux dits Grand Maupertui and Quartier des Marais Haut. One plot is below Grands-Échezeaux, the other by the château. The vines were planted in 1962 and 1968 on gravely, well-drained soil with high limestone content. The wine is aged in 75% to 100% new oak, depending on the vintage. Serious tannins to harness the terroir and sweetly fruited. The fruit is putting up more of a fight here, but it will need time to integrate all the components.

The wine comes from two parcels in Les Échezeaux du Dessus and Les Treux. The vines are 25 to 50 years old. And the wine is aged in 60% to 80% new oak. This is one of two cuvees of Échezeaux made by the domaine. A high level of ripe, dark fruit, with bitter cherry and dark chocolate flavours. No hurry to drink this now!

Aged in 100% new oak, the crop only comes from Les Treux. This is the signature wine of the domaine. Oaky and concentrated.

Mongeard-Mugneret has 1.44ha of vines in the middle of Grands-Échezeaux, in the upper part of the slope. The vines are 40- to 75-year-old, with a good portion of whole bunches being retained, which comes through in an exotic spice. The wine is aged in 100% new oak. Mongeard-Mugneret is the second largest proprietor of Grands Echezeaux, after Domaine de La Romanee Conti. Sweet spices and tea leaves, with sappy linear drive. This is an assertive, fully fruited style which is fully ripe and with fruit-coated tannins.