GEVREY-CHAMBERTIN
Corney and Barrow are pleased to announce a new UK exclusivity.

"A domaine that has been on one of the hottest hot streaks in contemporary Burgundy in recent years."
WILLIAM KELLEY, January 2022 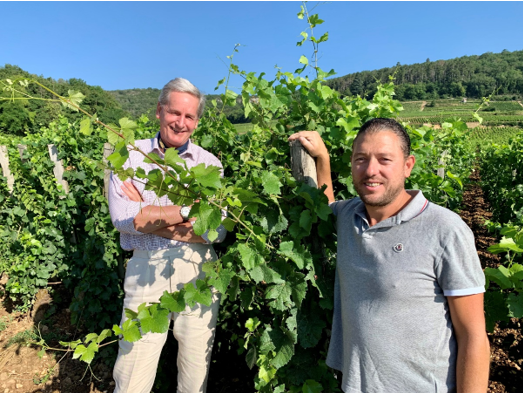 The Dugat family have been growers in Burgundy’s Gevrey-Chambertin since the early 17th century. Loїc Dugat, son of Bernard Dugat, is the 13th generation.

The family’s 15 hectares of vines include four of the great grands crus of the village: Chambertin, Mazis-Chambertin, Charmes-Chambertin and Mazoyères-Chambertin. Several wines are labelled “Très Vieilles Vignes”, in recognition of the estate’s particularly old vines, some of which are well over a century old. The average vine age across the estate is over 70 years.

The domaine has been organic since 2003 and follows the lunar calendar, both in the vineyards and the cellar. Several vineyards have recently been converted to the high-trellised tressage system of vine training.

The domaine buildings are located in the historic centre of Gevrey-Chambertin, at the foot of the Combe de Lavaux. Ageing of the wines takes place in the stunning 11th and 12th century cellars beneath the domaine.

Even more importantly than the historical resonance of the Dugat-Py name are Loïc’s recent initiatives, principally in the vineyard but also in the cellar. The could be summed up as detail-focused viticulture and sensitive cellar management, the results of which are just beginning to be seen. The tenderness and elegance of recent vintages marks the beginning of the next chapter of Dugat-Py, and one which we are thrilled and honoured to be a part of.

Domaine Dugat-Py's holdings are blessed with particularly old vines, many of which are over 100 years old. The oldest vines of the estate were planted in 1905

The domaine has 15 hectares, spread over more than 20 appellations, from which over 30 wines are made. The aim, as Loїc puts it, is “to obtain the quintessence of each terroir.”

The roots of the old vines reach 5-10 meters deep, contributing to the marked differences in terroir expression from plot to plot here. Soils are cultivated to enable deep rooting. In 2018, Loїc began to convert four parcels (grands and premiers crus) to the tressage method whereby untrimmed vines are ‘arched’, so as to encourage root growth and energy flow. By raising the height of the trellis to 2.2m, using six wires in total, it is possible to ‘braid’ the long vine canes back into the canopy.

The domaine embarked on its first organic trials 20 years ago. Loїc stresses that it has always been obvious to him that “nature must be preserved” – an approach which also happens to result in the best quality wine. The team follows the lunar cycle for vineyard work and cellar operations, “as our ancestors did”, as well as using biodynamic preparations.

Two hectares are now ploughed by horse – including in the steep PernandVergelesses 1er Cru Sous Frétille.

The historic Dugat-Py cellars are the only remaining part of a 9th century abbey.

Built in the 11th and 12th centuries they are, according to Loїc Dugat, Burgundy’s oldest. The abbey itself belonged to the St-Benigne order in Dijon. Aumônier (Abbot) Halinard was responsible for its construction, at the foot of Gevrey-Chambertin’s Combe de Lavaux. Of particular note are the Aumônerie’s gothic vaults and Byzantine style. Its six-metre height is extraordinary, lending a quasi-religious character. Indeed, in its early years, it would have been the monks who tended to both the vineyards and the cellar.

The cellar contains bottles made by Loїc’s father, grandfather and great-grandfather. All vintages since 1950 are represented, as well as some even older bottles. This large area of natural cellar space, with no need for air conditioning, is a rare luxury in the region.

Cellarage and ageing are clearly close to Loїc’s heart. He stresses, “the great terroirs only wake up after 5-10 years in bottle.”

Loïc has reduced the percentage of new oak. His father Bernard tended to use 100% new oak for all premiers and grands crus, and sometimes for communal appellations too. The premiers crus now see around 50% new oak, and the Vosne-Romanée just 30%. Loïc has also refined his selection of forests, seasoning and toast. The domaine’s cooper is François Frères. 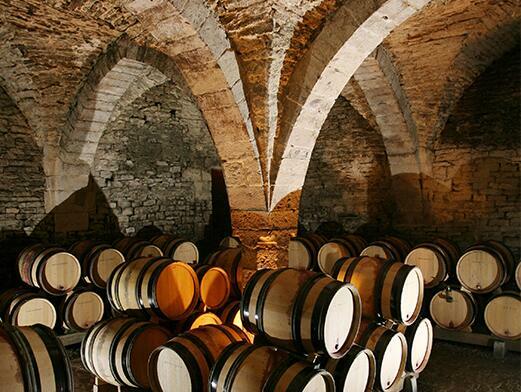