Many years ago now, we were fortunate enough to be staying at Trinoro when Andrea regaled us with news of his new project - based in Sicily – more specifically on the live volcano, Etna. 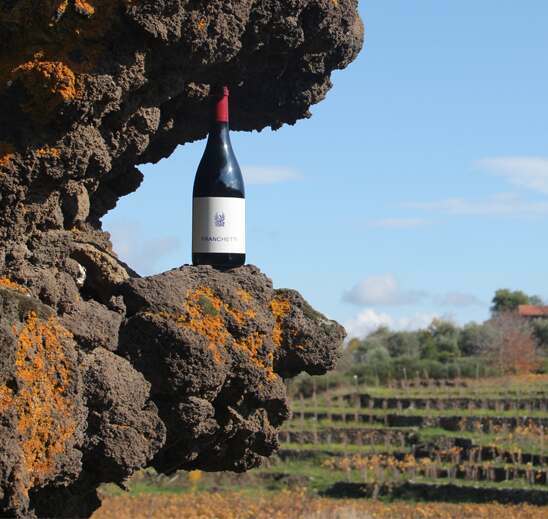 His aim was to restore ancient vineyards on the slopes of the mountain, vines abandoned by farmers upping sticks due to the sheer difficulty in making ends meet through phylloxera, war and the impossibly steep slopes. …or perhaps it was the lava-belching volcano which frightened them away. The after dinner entertainment found us treated to reel after reel of footage of flames, red and white hot flying rocks and rivers of apparent fire. It was not hard to see why the vineyards might have been abandoned – totally terrifying.

A late ripening year on Mt. Etna as well, the vintage was characterized by a decidedly cold spring during April and May, with a light frost over May 6. This persistent cold weather continued until the end of May without interruption, causing a significant delay in flowering, which itself continued until the middle of June.

June finally brought a gradual and constant increase in temperatures, with the chardonnay flowering first on the 13th, with subsequent fruit set, sparser this year. Then, toward the end of the month, we began to have incredibly high temperatures, peaking near 40 degrees Celsius; these heat spikes lasted until the end of September, allowing the vines to recuperate some of the time lost by the cold spring. This allowed us to begin thinning the berries at the start of August.

The Chardonnay harvest began later this year, on September 17th, and entering into October, we had an important jump in phenolic ripeness in the red berries thanks to a dramatic period in the diurnal cycle that occurred at the same time as the first quarter moon.

This vintage brought about sinuous wines that are not too high in alcohol, with the right equilibrium between fresh fruit and vertical acidity, characteristics due to this final period of physiological maturity at the end of the winding growing season. A year of excellent quality since the rains spared us their odious inference.

Andrea Franchetti arrived on Mt. Etna in 2000 as one of the first of the modern wave of producers arriving on the volcano. There he found seventy to one hundred year-old, bush-trained vines across the northern side of the volcano across a variety of optimal sites between 550 and 1,000 meters (1,800 to 3,300 feet) above sea level. The grapes are taken from various contrade (crus) of Malpasso, Guardiola, Santo Spirito, Favazza and Arcuria; generally, the higher crus are on a more gravelly soil, the lower ones in a deeper powder made with more oxidized, older lavas.

The Summer of 2020 was moderate with rains but at the end of July the heat returned. There were rains on the 10th of August and then again in early September. Later in September after the whites were fermenting came the rains as well as a little hail. The first of October brought strong winds and the mountain turned cold. The rest of October was clear and the red grapes began to ripen. First was the Cesanese d’Afile which is more sensitive to the cooler October temperatures, followed by the Petit Verdot. The Petit Verdot harvest started on the 24 of October to the 26th where we found the opportune moment to harvest while the grapes were showing perfect balance. The grapes proved to make a wine that is dark and complex and will benefit from extended aging.

Instead of the indigenous Carricante, which grows on the eastern side of the volcano, Passobianco is made of 100% Chardonnay. When Franchetti arrived on Mt. Etna, he planted 4 hectares of the grape on steep terraces between 850 and 1,000 meters in the contrada of Guardiola, in very loose, deep, powder-like lava that is high in minerals.

The 2019 vintage is bright yellow in colour with citrus and tropical fruit coming through on the nose. Medium to full bodied citrus and stone fruit flavours supported by touch of oak in the long finish.

Passorosso is made from the grapes of nerello mascalese, blending across different altitudes and soil types. This wine is a holistic expression of the breadth of flavors that Etna can produce with a character that distills this unique growing environment in a glass, reflecting the variations of each vintage. The wines age in large, neutral oak barrels and are unfiltered, presenting an interpretation of nerello mascalese that is bright, pure, red-fruited, mineral, and herbaceous, and with age, it begins to lose its color and gain exotic aromas of camphor, sandalwood, and spice. The first vintage was in 2001. Starting with the 2014 vintage, Passorosso has been designated Etna Rosso DOC.

This year, Passopisciaro, the Mount Etna producer that launched that area’s wine renaissance, is celebrating the 20th year since its first harvest with a special-edition magnum of Nerello Mascalese, for collectors and connoisseurs of rare, one-of-a-kind wines. The label is spare and minimal, bearing the name “20 Anni” (20 years), the winery logo, and the personal signature Franchetti on a white background.

The 2019 has a lovely fragrant red-fruited nose with lots of fresh juicy red fruit on the palate with gentle tannins and good acidity. A little alcohol showing in the finish but should be great in a year or so.

To celebrate this intriguing land, an integral part of one of the world’s most active volcanos, Andrea Franchetti has bottled a magisterial cuvée of the finest lots from all the estate vineyards, a shimmering red quintessence produced in only 1,550 magnums. 20 Anni is additionally unique in that it was produced solely in 2019.
20 Anni crowns two decades of achievements on Mt. Etna, the distillation of intuitions, passion, expertise, and experience. Says Andrea Franchetti, “I wanted to create a cuvée of Nerello Mascalese from all the contradas of Passopisciaro as an homage to this magnificent earth, to the years that have passed, and to the future that awaits us.”

Having worked for several years on Etna, Andrea Franchetti observed that different districts on the mountain produced different styles of wines. So, from 2008, he started to keep the wines separate, as “crus” or
“contrade”. Each of the five wines comes from a different altitude, vines of varying great age and different lava flows. Quite a tapestry of terroirs. Depending on one’s
point of view this is either thought-provoking or mindboggling but, rest-assured, the finished wines are of more than academic interest. Added to the mix for the
first time, a white, also developed by identifying varied expressions produced in different parcels. With a roll of drums… Contrada Passochianche “PC” is released. Here, for simplicity, we start with the launch of the new white
before presenting the five Nerello Mascalese contrade in ascending order of altitude.

Contrada Chiappemacine is a small district, located at 550m the lowest of the five. This vineyard produces a full and round wine because of the sandstone soil that is found at the limits of the lava flows. The breezes of the day and a few roots that reach up to the limestone give a full, frustrating and with body wine. We have 1,3 Ha of vineyard in this Contrada. Light ruby in colour with lots of bright red fruit on the nose with a hint of oak. Full bodied, powerful with a good tannic structure and despite 15% alcohol it remains very well balanced.

Contrada Porcaria is a large old domain at 650m and is considered Mount Etna’s famous and sought-after contrade because of the lush, robust wines it produces. The soil is made of a frail sheet of lava that splinters under one’s feet. Beautiful fragrant aromas of bright raspberry puree along with a hint of spice on the nose. Big and powerful yet elegant raspberry notes framed by tight tannins will enable this to age effortlessly but already approachable.

Contrada Guardiola is an ancient domain between 800m -1,000m on the edge of the lava flow from Etna’s 1947 eruption. It produces a deep and complex wine with a rich taste of red fruit. This wine is made from a careful selection of some of the older nerello mascalese vines, which have been bottled separately beginning in 2011. Deeper colour and darker red and black fruit on the restrained nose with a touch of pepper. Tighter and more linear than the others with good acidity and a firm structure that isn’t giving much away at the moment. This will need time.

Contrada Sciaranuova is located at 850m on Mount Etna. In Sicilian, “sciara nuova” means “new lava flow.” The vines here are planted on relatively new lava flow from the 1600s that has turned into thick gravel. The wines produced from this site are bright, aromatic, and have a rich taste of fermented hay and a dusty herbal quality. With only 1 hectare of this tiny cru, it produces about 2,000 bottles annually of Contrada S. A hint of oak on the nose along with fresh bright fruit and spices. Lucious raspberry surrounded by firm tannins that will need some time to soften. Quite tight.

Contrada Rampante is the highest cru at 1,000m. At the highest confines of viticulture on the northern side of Etna, Rampante is an ancient contrada, producing one of the volcano’s finest, most aromatic wines because of the sandy character that the lava has acquired. Due to the altitude, it is typically the last contrada to ripen. Restrained red berries on the nose that’s not showing much at the moment. Full bodied, tannic with lots of alcohol and tanning to hold it all in place for the long term.

Franchetti is the top wine produced at Passopisciaro, a Super-Etnean wine of petit verdot and cesanese d’Affile from volcanic rock and ash. The grapes were planted in the early 2000s after Andrea Franchetti purchased the estate in the contrada Guardiola – a dense planting with vines 90cm x 90cm apart, at 1,000 meters (3,300 feet) above sea level.

Powerful, rich and fragrant nose of deep dark black fruit. Full bodied, rich, tannic and very concentrated with plenty of power and alcohol to keep it all in place.