This exciting domaine shows that genuine greatness can be achieved in humble terroirs when ambition is combined with compassionate intelligence, hard work and perseverance. 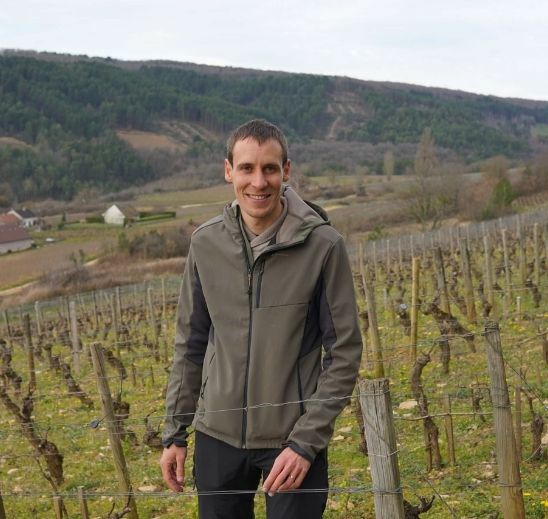 Jean-Baptiste’s first comment on 2021 was about how difficult it had been in the vineyard. Three days of frost had ravaged the nascent buds, 7th April having been the worst. In his words, 2021 was worse than 2016, when not all the plots had been affected by the ‘white plague’. On the contrary, in 2021 all the vineyards were damaged, although for various reasons. Either the location served up the vines ‘on a silver platter’ to the frost, as happened in his cool Aloxe-Corton holdings, or it was the vineyard’s topography which ‘pulled the trigger’, like his Corton Renardes, which is exposed on the south-east facing slope, to the cold morning air.

The second ‘plague’ was the diseases triggered by the wet summer. More rain than average lead to mildew and oidium attacks, reducing the yields further. Harvest was delayed to 18th September, starting in Savigny for the domaine. It finished on the 22nd, with the plots in Aloxe, Pernand and Corton.
The last three weeks of dry and sunny weather, before the harvest, saved the vintage, allowing for the grapes to reach maturity. It is on this positive note that Jean-Baptiste concluded his description of this annus horribilis.

Asked to describe the wines, I sensed a certain happiness and excitement in Jean-Baptiste’s voice (I had called him to get his sit-rep on the 2021s). Although the growing season was a nightmare, the bruised vines have produced a tiny crop of quality. Yields maybe 50% to 80% down, potential alcohol levels are between 12.8% and 13.2%. The crop was very healthy. There was sufficient substance to make good wines.

The red wines are elegant and refined, digest and aromatic. It is a break away from the solar ’18, ‘19’ and ’20 vintages, heavier in style. A return to the classic Burgundian vintages. They are already tasting well now, and will probably shut down at some point, but they will be wine for early drinking, while patiently waiting for the 2020s to come around. His whites were heavily affected by the frost, in quantity terms at least.

In 2021, a sorting table helped to only send the best berries to the vats. It was the only expensive investment of the year. No new oak was used at all, because the volumes were too tiny. Instead, the best barriques (la meilleure futaille, in Jean-Baptiste words) were used for a short élevage (ageing).

While maturation in oak lasted about 18 months for the 2019 and 2020 vintage, the 2021 was bottled between October and November 2022. This is about just 8~10 months in wood. Jean-Baptiste took this decision to preserve freshness, energy and balance. And only the Savigny Les Peuillets and the Savigny village saw some whole cluster at fermentation time. That terroir of fine sand is warming rapidly, producing strong grapes and the roundness of the wine have allowed such extravagance.

As the Burgundy 2021 campaign is starting, the cellars at Boudier are full of the generous 2022 harvest and Jean-Baptiste is happy. However, his 2021s are very good, despite all the odds; you should get some. Let’s start here!

History, the estate and winemaking

After the 2014 vintage, Jean-Baptiste and his dad decided it was time he enjoyed some independence. The next harvest was to be his first solo year. For his first vintage, 2015, Jean Baptiste bottled part of the harvest under his own name and sold the remainder to negociants to generate some cashflow. With the first success and some money in the bank, he took the opportunity to add new plots to the family holdings and increase the size of the estate from 3 ha to 6.5 ha.

His latest additions are 2 prized plots around the hill of Corton: 86 ares of (0.86 ha) Savigny Les Beaune Les Peuillets; a dry and sandy soil, producing engaging wines. And he has also recovered 50 ares (0.5 ha) of precious Corton Les Renardes. The range includes wines from the Côte de Beaune, near Pernand-Vergelesses.

The cellar, in the upper part of Pernand, very near Domaine Bonneau du Martray, is humble yet efficient. Every square meter is maximised and underneath, carved into the rock, there is a cellar with perfect natural humidity and low temperature to age the wines.

Vinification is simple, in concrete and stainless steel tanks. The white wines are pressed directly, whilst the reds are mostly fully destemmed. Jean Baptiste added some whole bunches in the ripe vintages of 2019 and 2020, but this remains the exception. Indigenous yeast transforms the must into wine. The extraction is gentle, infusion-like in fact. Only a little SO2 is added. The wines are aged in old oak barrels and bottled after a very light filtration (if needed). Jean-Baptiste practises minimal intervention in the cellar. Good wines are made in the vineyard, with lutte raisonnée (sustainable farming) setting the rules.

This plot is in the upper part of the slope, a cool site, the vines planted on white marl and limestone. The wine is fresh, zesty, with a good tension, inviting you back for another glass. The palate reveals orchard fruit, white flowers and a touch of sweetness on the end. This is really good.

There is charming finesse to this cuvée. The aromas of white fruits and flowers are soft, almost shy, but elegant and precise. This is very well made. The whites of Pernand show a different spectrum of aromas when compared to the whites of Puligny. Not as mineral as the latter, slightly fleshier and more floral. This will drink well.

This cuvée is a blend of two plots: Ez Connardises and Les Peuillets. The vintage was simply too small to produce two different wines. There is a small percentage of whole cluster because this area is warmer thus allowing for sufficient ripeness to use some of the stems. The nose starts with smoky notes and evolves into crunchy red fruited aromas. Upbeat energy, with a fleshy generosity. Appealing wine.

This is a step up from the Savigny village. Citrus aromas dominate on the nose, complemented by red berries and tea leaf notes on the palate. Like the other reds, there is plenty of energy and vivacity in a wine that is elegant and sharp. “Perfect for sushi”, I wrote in my notes.

The cuvée Les Fichots is elegant, savoury and intense. Jean-Baptiste’s precise winemaking has produced a wine that is well defined and expressive. There is a lot going on on the palate, which is complex, with citrus and small red berry fruit. The minerality of the soil adds texture and structure. A food wine for sure.

For a wine from a cold site, there is a pleasing ripeness here. Aromas of sweet spices and plush fruits emerge from the glass. The palate is vivacious with nuanced complexity and layers of red fruits. Highly promising.

A nearly half-hectare plot on the eastern side of the hill of Corton. This was badly affected by the 2021 frost, meaning quantities here are tiny. Chalky minerality and dark, pure berry fruit, with mouth-filling rose petal perfume. Just three barrels were made, of one year old oak.